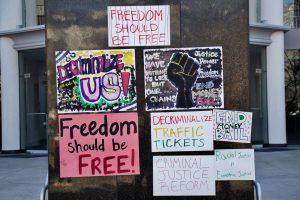 PLAN’s roots in criminal justice issues in Nevada go back to 2003, when we organized to remove barriers in voting and employment to formerly incarcerated individuals. Today, this work is carried out through the Mass Liberation Project, a PLAN-led collaboration among community organizations and directly impacted individuals.

We seek to structurally transform Nevada’s criminal justice system by organizing with people who have direct experience with mass incarceration and their families. We are also focused on intersectional advocacy since criminal justice reform also means changing harmful policies such as 287g, and because the Native American community is also disproportionately impacted by the system of mass incarceration.

PLAN’s mission includes deepening democracy. This means that the work we do should not only lift the voices of those directly impacted by the issues we fight but also that we must reduce and eliminate the barriers to participation individuals face on a daily basis.

Black liberation is not only threatened by mass incarceration, but by white supremacy and neoliberal economics, which PLAN also addresses in our organizing programs. In addition to advocating for specific reforms such as ending money bail and decriminalizing traffic tickets, we also sponsor the Vegas Freedom Fund, a Mother’s Day Bailout program, to highlight the gender-based discrimination of mass incarceration.

With the Legislature’s recent passage of Senate Concurring Resolution 11, which creates an interim committee to study pretrial release of defendants in criminal cases, PLAN must organize community members and coalition partners to ensure an outcome that is favorable to our communities. This will require a great deal of organizing work, which will set us up for success in the 2021 session (the next time the Nevada legislature will meet). Additionally, in partnership with a cohort of other local/regional organizations and the Community Justice Exchange, we will create a community oversight plan for the introduction of pretrial risk assessment tools.

PLAN views our organizing around risk assessment as part of a larger strategy to transform the criminal justice system in Nevada by building a base of leaders who are committed to the long-term effort and by winning incremental policy reforms. In addition to winning policy reforms through our legislature, we have identified other potential leverage points such as city councils and the Clark County Commission, which have members who are key allies of PLAN. We know that good, strategic movement toward reform and liberation will be incremental. We want to build a structure to integrate this work with PLAN’s other priorities, especially economic justice and civic engagement, over the long term.