The changes in Nevada related to racial gaps in voting have been remarkable. White working- class voters are down 24 percent since the 1988 election, while voters of color increased 19 percent. The Latino share of all Nevada voters grew from 12 percent in 2006 to 15 percent in 2010, the largest increase in the western US. 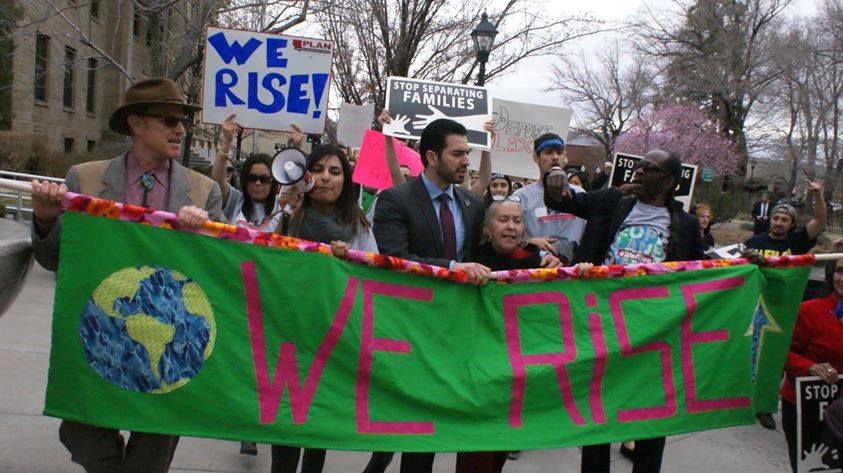 People of color are on the cusp of being in the majority; whites make up 54 percent of the population, compared with 65 percent in 2000. Nevada had the second largest racial generation gap in the nation, behind only Arizona, with only 39.5 percent of its children but 58.9 percent of its adults being white. Latinos comprise 27 percent of Nevada’s population, up from 20 percent in 2000. Nevada also has the largest share of undocumented immigrants at 7.2 percent, compared 3.7 percent nationally. Nevada’s youth demographic is also experiencing big changes. Nevada led the nation with a 30 percent increase in children under age 18 from 2000 through 2010. Yet all of these groups are under-represented in the electorate, elected office, and policy decisions made in our state.

We believe everybody’s voice is valuable and that our democracy is most vibrant when as many people are participating as possible.

That doesn’t have to be the case, however. People of color, youth, and single women in Nevada makes up 57.4 percent of the Voting Eligible Population, but 478,000 or 48 percent of these eligible voters were unregistered in Nevada heading into 2012. We believe everybody’s voice is valuable and that our democracy is most vibrant when as many people are participating as possible. For these reasons, PLAN conducts regular voter registration drives and non-partisan Get-Out-The-Vote drives in the state. We reach out to people that others have written off, and we offer a refreshing message on politics, talking to voters about the importance of governance and the need to make their opinions heard rather than urging support of one candidate over another. We provide information so that all voters have the resources and confidence they need to participate in our elections.

In 2012, we registered over 7,000 voters, mainly high school and college students and low income families. We reached out to over 40,000 young voters by phone and increased early vote turnout by 10 percentage points among the 5000 people we talked to during that time period. PLAN is committed to year-round voter registration and GOTV efforts that lift up marginalized communities, and will also pursue policies to improve and expand voter registration opportunities for all eligible voters.

Every election year, tales alleging widespread or systematic voter fraud arise in the public dialogue. In over six years of investigation by the U.S. Department of Justice, from 2002 to 2008, only 140 people had been investigated for voter fraud nationwide; despite this, rumors still abound. In recent Legislative sessions, bills that might appear innocuous are introduced to try to prevent voter fraud. Unfortunately, these bills not only do little to address voting irregularities—often the result of oversight by registrants and/or elections officials—but also restrict the franchise.

Currently, voters must show identification only when registering by mail and voting for the first time. Several bills were introduced this session to impose additional identification requirements for voters. All of these bills fail to increase the security of elections while adding barriers to voting which will disproportionately disenfranchise people of color. For example: African Americans have been found twice as likely to lack a driver’s
license as whites, and only 22 percent of African American men between 18 and 24 have a license. There are a range of options other than state-issued photo ID that can be used for this purpose, including utility bills, paychecks and bank statements.

PLAN is dedicated to protecting the right of the franchise for all eligible voters and worked with others to oppose a record eight voter suppression bills in 2011, none of which left their originating committees. PLAN will continue to protect and expand the both the accessibility and integrity of Nevada’s elections, opposing voter ID and early voting restrictions and also pushing for expanded voter registration and election administration policies.

Part of our obligation as a progressive organization is to foster volunteers through a pathway to leadership. We need more people to take action in order to achieve a more just society and we need to develop new leaders to apply fresh and creative perspectives and more work forward as others phase out. As we often say, “Our goal should be to put ourselves out of business.”  If we aren’t passing the torch, we are dropping the ball, and we need leaders throughout the community to take progressive practices and knowledge and apply them to their lives and careers.

PLAN collaborates with partners to provide a variety of leadership development opportunities for progressives in Nevada. Through our internship program, we work with students from high schools and colleges to give young people hands-on immersion in social justice work while earning school credit. We’ve worked to provide developmental opportunities to social service recipients, transforming them into community advocates. Every year we send a diverse group of local activists to AMP, a weekend training in Portland, OR put on by our friends at the Western States Center. Through our Dismantling Racism workshop, we train people to see issues and experiences through a racial justice lens. Additionally, we put together trainings on timely topics and have sent activists to numerous other trainings in order to develop a talented corps of community leaders in our state.