My family moved to Nevada in 2003 from California, as I was nearing the end of second grade. I found it strange that the next two or so years of my education would seem like review instead of new information. At the time, it wasn’t an unwelcome review. To my classmates, I seemed like a genius. It wasn’t a problem to me until I started to think about other children that would be entering Nevada’s schools–particularly my nephews, my young cousins moving into the state, and eventually my own children. I started to wonder what kind of education they would be receiving.

As it turns out, mining was, and still is, a huge culprit.

Nevada is a beautifully reliable state for mining, and currently ranks as the best in the world for mining investment. This comes as no surprise as the state serves as the largest source of gold in the United States, and one of the largest sources of gold in the world. So why aren’t mining businesses in Nevada paying their fair share back to the state?

Mining has been uniquely protected in our constitution since 1864, and because of that, mining businesses get to enjoy deductions that other businesses (especially small businesses) do not. Not only that, but there are currently no caps on the deductions that these mining businesses can claim. When Nevada doesn’t sufficiently tax its second(?) biggest industry, it’s no surprise that the state is constantly running out of money to fund services like education.

This means Nevadans have been without the vital educational funding we deserve for 157 years. That is 157 years that students in our education system could have been thriving, not constantly falling behind students from other states by no fault of their own. That’s 4 generations of Nevadans that we have been letting down. It’s obvious that we have incredible teachers in our state, with the recent recognition of National Teacher of the year from one of our local middle schools, but we are continuously doing them a disservice by underfunding the classrooms and programs their students need to thrive. It leaves me with the thought that no wonder we have one of the harshest teacher shortages in the country- why would anyone seek a profession that receives no support from their state?

It’s a no-brainer that our kids deserve to thrive in Nevada’s education system.  Lawmakers in the 2021 Legislature have the opportunity to bring much-needed funding to the state, especially to education, with AJR1** which would specifically earmark funds for education and we have to urge them to make this vital decision with Nevada’s children in mind. I am pleading with my Assemblyman Richard McArthur to remember his constituents like me, and vote to pass AJR1** to support Nevadas students and teachers.

Allison Dacome has been a resident of Las Vegas since 2003 and graduated with the class of 2013 from Arbor View High School. She’s a volunteer with PLAN and her dream is to run a rescue for senior and “unadoptable” dogs. 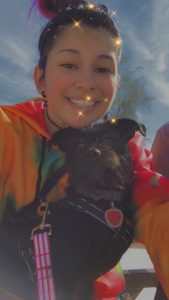