The Abandoned Anaconda Mine in Yerington Nevada is a historic open pit copper mine. Over the years, the mine has been owned by various companies, and was purchased by the Atlantic Richfield Company (ARCO) in the 1970’s. ARCO became a subsidiary of British Petroleum (BP), and although BP never mined the site, the company owns the liability for ongoing pollution.

Anaconda was approved as a Superfund site, meaning it was set to have federal funding and oversight for clean-up activities. Though in 2018, a closed door deferral agreement was signed to shift oversight to the state and funding to a state-private partnership.

Clean-up has begun, with the creation of drainage ponds, and a plan to cap waste rock piles. Despite some progress, there are concerns that will likely remain unaddressed. There is no guarantee that there will be groundwater remediation to address a plume of uranium in the aquifer that has forced many to rely on bottled water for a decade. Mine waste was used in construction throughout the adjacent town, and although this is outside of the scope of clean-up plans, there are concerns.

In late 2019 I sat down with a Yerington resident and retired mine employee, Melvin Diehl, to discuss what it is like to grow up, live, and know death in the shadow of Anaconda. 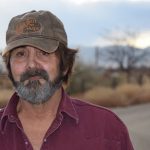 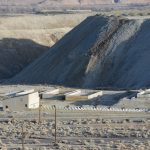 Tailings at the Anaconda Mine (Yerington in the distance) 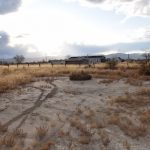 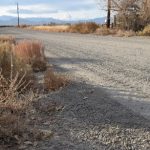 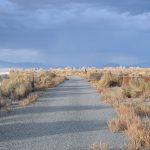 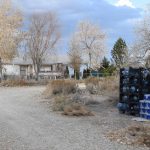 “I’ve had quite a few friends that died real young from… Whole bodies just filled with cancer. Some of them worked at the mine, some of them lived up there. To see somebody in that kind of shape, it’s pretty rough. I have no agenda to hurt people, but this needs to be cleaned up. Not for me, I am too old, but for the younger generation. They don’t need to be exposed to this stuff.

I was born 1955 in San Andreas California. My parents lived here (Yerington), but she wanted to have one of her kids in California, so they went and had me there. I was back here two days after I was born. I grew up in Yerington. I graduated highschool here, worked at Anaconda I think for two or three years after that, and then I went driving trucks and moving houses around that area before I worked at different mines throughout my life.

There used to be a lot of closeness and stuff. Not so much anymore, most of the oldtimers are moving out, and people are moving in. It used to be a pretty little valley, good hunting, good fishing. Quiet. It’s my home so I just came back here, and this is where I’m going to end up.

I’m glad my family doesn’t live here. My daughter and my granddaughter, because they’d be exposed to this stuff. I’ve talked to them, showed them what I’ve been doing and my paperwork. They kinda understand what I’m saying, but they didn’t live it like I have. I’ve seen stuff happen, and I didn’t realize it for many years until I came back, what was going on around here.

Nobody knew about the dangers that it had with the uranium or dust or any of that. I’d go down to the dump, and we’d play down there. That was some oxide tailings they had down there, but they wouldn’t let the kids on the site itself to see what was going on.

One of the places we would hang out in highschool was called the country cone, and they would bring in all the mine tails for the parking lots. They had it in highschool for the parking lots. You would see it all around on the roads. They would put it on the edge of the roads because the acid that was still in there wouldn’t let weeds grow through. I didn’t know about this being radioactive until I moved back from Vegas when I was about 60. Even when I worked for Anaconda, Nobody mentioned anything about uranium. But, now I look back, my dad used to carry a geiger counter with him in his work truck, but I didn’t put two and two together when I was young.

Where I live out here, it is all sandy soil. So everybody had tailings hauled in for roads for compaction cuz it packed really good and hard. It is used on all the county roads pretty much. Out in Sunset Hills, it’s all oxide tailings. The state used them on their road shoulders. Nobody complained about it.

I came back, and I was reading about the water. It was in the newspaper. Then I started going through their web page on Anaconda pollution, and reading all the articles. It told about the oxide tails being high in uranium, and I had a few friends die young from cancers… Way too young. Everybody has been around this stuff.

Well I came across some peoples names that have passed away from different cancers on one street in Yerington. Over 40 people on this street that died and no one will look in to it. See what’s causing it, what’s related to it. Could it be the water? Could it be the dust from Anaconda? There’s 100 streets in Yerington if there’s 40 cancer things at least on one street, what are the odds?

I worked for a man who died of cancer. He was a house mover, and he was a big guy, about 6 foot 4. Huge, probably 250. Good health. Strong. All of a sudden he got sick, and he had tumors all over his body real bad. He went from 250 pounds to about 120. He had surgery on his head where they tried to cut out a tumor. He looked so bad, I hated to go visit him. It was…. You know, I feel bad about it, but it was hard to handle.

Then I knew this other gal. A little bit out of highschool, she was full of cancer. Just had a baby, and she was married to a friend of mine. She had tumors all over her body and her sight was going. She ended up dying, and left her husband with a little baby to raise. Just full of cancer.

There was a hairdresser I knew who was just a couple of years older than me. Same thing happened to her. Just full of tumors. It’s just sick to see somebody like that, and not know why they got it, and why its so bad. If it’s from Anaconda, I don’t know, but it kinda looks like it could be.

Everything that I bring up, it seems to go through people’s ears. Even the state people. They don’t seem to care. They know that they hauled the tails, the county did, or state. They hauled hazardous waste and spread it across the valley, and they don’t want any part of it.

The Nevada Revised Statutes say that if hazardous waste is affecting the land or water then a remediation plan or other actions to reduce the hazard should be taken. They are doing some of this for the cleanup at the mine, but no one is looking at the tailings the hauled out for roads. If they know some of this stuff is hazardous, and that it was used on the roads and the highschool parking lot you’d think the law would make them clean it up. No one wants to pay for soil tests though, so it’s all anecdotal and they haven’t had to do anything.

They are supposedly going to cover up the tailings up by Weed Heights, and that could help with the wind blowing and you know radon all over making people sick. What are they going to do about the rest of the cleanup across the valley that needs to be done. Why don’t they test the rest of the wells to see what levels they’ve got. The county roads are all made out of tails, and that had to pollute the water table and peoples wells.

I have a friend who lives out in eastern Mason Valley on Cordon Lane that had his well tested by ARCO and it was really high in uranium. They started delivering bottled water to him, and he is the only person on the east side of the river who is getting that.

I’d like to see them test other people’s wells where they have spread these tailings around cuz it goes down into the water table, and clean up the shoulders of the roads where they used all the tails. State and county say they can’t afford it, but I’m sure BP or ARCO has the money to do it. Something has to be done around the school and the parking lots and stuff. The kids are exposed to it. It affects everyone differently and I don’t want to see any kids die from the pollution from Anaconda. Think that would be one of the top priorities, but nobody seems to care about where those tails have been spread.

You know, it’s not right that some people come in, cause contamination with hazardous waste all over the valley and then they leave, and act like its not their problem. Somebody should take care of it, because it affects the younger generation, and it’s just not right. It needs to be cleaned up, it should be cleaned up.

Tails/ Tailings- Rock that has been mined and is leftover. Tailings have been mixed with a chemical leaching agent which separates the desired mineral from rock. Sometimes tailing are mined multiple times as technology improves or the value of a mineral increases.