Stop The Violence on the Land and Bodies! 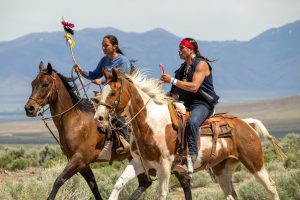 Lithium Nevada, a subsidiary of the Canadian corporation, Lithium Americas, is still advancing its gross excavation needs at Peehee Mu’huh (also known as Thacker Pass, NV). The People of Red Mountain (Atsa Koodakuh wyh Nuwu), the tribal opposition to this project; has fully objected to a 2-mile and 400 ft. deep pit that would contaminate land and water while destroying cultural sites and potentially graves.

During the pandemic and previous administration, the project’s Environmental Impact Statement (EIS) process was fast-tracked creating an ideal position for Lithium Nevada where the McDermitt Tribe was closed off to proper formal consultation.

On the mountain is an oral history surrounding a large massacre of Indigenous People’s and the extent of evidence that Nuwu and Newe (Northern Paiute/ Western Shoshone) are deeply connected to this place. Peehee Mu’huh (Rotten Moon) resurrects itself at Thacker Pass as the only sacred place that can tell that story of truth of the massacre. This horrific tribulation of mass killings was enacted by the United States across native lands and at Peehee Mu’huh.

On June 23rd, Far Western Anthropological Research Group , Inc. plans to begin its studies at Thacker Pass; meaning they have been permitted by the Bureau of Land Management to culturally disturb Thacker Pass. This includes exhuming Indigenous ancestors. The People of Red Mountain are in need of support to offset costs in fighting Lithium America, Lithium Nevada, the federal government and for-profit archaeologists, who have gained wealth from Indigenous lands while oppressing the people who reside and protect these sacred places.

If you are able, please consider donating to this important cause. And if you can, join us at Peehee Mu’huh!