PLAN Statement on Anti-Asian Racism Following the Murders in Atlanta

Yesterday, on March 16th in Atlanta a white man murdered eight people, seven of them women, six of them Asian American. The history of Anti-Asian violence is the history of America. The idea that Asians belong in Asia has been around forever.

It’s a huge part of our Nevada history: Chinese immigrants built the railroad that built Nevada and the west. Hundreds of Chinese were killed and murdered. (See Gordon Chang’s book, “Ghosts of Gold Mountain”.) Chinatowns in the west were burned all the time, including twice in Reno in 1878 and 1908.

The first Bingo/gambling hall in Reno, opened in 1934, was owned by two Japanese families, three years before Bill Harrah opened his in 1937. They lost it when they were declared enemy aliens and the government seized their assets seized after Pearl Harbor.

The railroad banned Japanese from their property after Pearl Harbor, fearing sabotage. Whole towns of NV were owned by the railroad then, including Gerlach, where the Japanese were kicked out of town into the desert in the middle of freezing winter with no heat, water or sewage. PLAN supporter May Shelton, whose father was “interned”, after Pearl Harbor, taught us to call Japanese internment camps during WW2 “concentration” camps.

The point is that anti-Asian violence and racism is ongoing and historic. In the first two weeks of March alone, there were an average of 100 hate crimes per day—and that was before last night’s act of horrific violence.

Responses at all levels are crucial, from the individual, organizational, community, and national levels. Reflection is also crucial.

Aspiring allies, join us in taking time to journal about how you’re feeling in this moment, and about our commitment to standing with AAPI colleagues and the Asian community. How will you take action, and how do you know you will be effective? 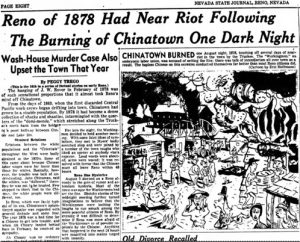